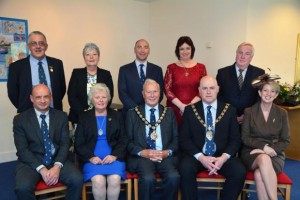 Councillor Brinsden, who has been County Councillor for Amroth since 2004, supported a number of high-profile criminal cases in Pembrokeshire during his career in the Regional Crime Squad.

Based mainly at Llanelli CID, Councillor Brinsden worked on the investigation into a major drug-smuggling operation at Aberbach in 1985, and supported the Pembrokeshire investigations into the Scoveston and coast path murders committed by John Cooper.

On his retirement from the police force in 1995, he returned to his native Llanteg and spent some years working for the Welsh Blood Transfusion Service before setting up a private investigation business with a former police colleague, which continued until he was elected Member for Amroth.

He was born and brought up at Stanwell, a smallholding at Llanteg, and attended Crunwere and Amroth primary schools and Narberth Grammar School.

In his spare time, he enjoys taking one of his three MG sports cars out for a spin and taking part in classic car runs.

His consort during his year of office will be his wife of 53 years, Margaret. The couple have two children, Helen and Andrew, and five grand-children.

A vote of thanks was given to the outgoing Chairman, Cllr Wynne Evans, by Council Leader, Councillor Jamie Adams.

He said Councillor Evans had fulfilled over 450 engagements in his year of office.

The ceremony at County Hall, Haverfordwest was attended by the Deputy Lieutenant, Sharron Lusher.